Gran Fondo means long distance or great endurance.  Gran Fondo is a 500+ year tradition that originated in Italy as a walking event, which then progressed to bicycles, and continues to be held in idyllic regions throughout the world.

As in past years, a temporary bus stop will be positioned in Lorne, and will be located in Otway St, near the roundabout and information centre.  Mountjoy Parade between Otway St and Lorne Hotel is closed to traffic.  Please note the Lorne Hotel stop will not be serviced. 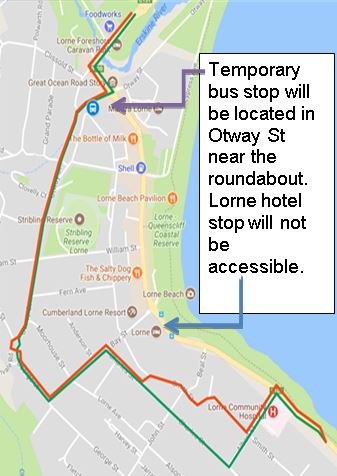 Due to the road closure on the Great Ocean Rd, from Lorne to Skens Creek, and closure of Skenes Creek Road, the 9:43 service from Apollo Bay to Geelong and the 10:13am service from Geelong to Apollo Bay will travel inland via Lavers Hill.

If you can’t find what you are looking for on our web page, there are several ways you can contact us below.

In Person or via the Phone

Recruiting Drivers Now! We Wear Your Words
Scroll to top