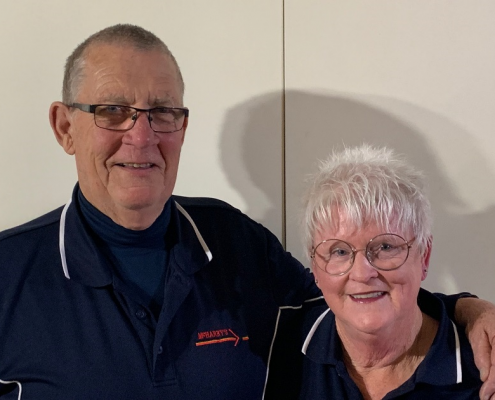 We recently experienced the end of an era with the retirement of both Helen and Robin. Both have worked with McHarry’s for the last 19 years and for the 12 years prior with Advance Buslines before it was acquired by McHarry’s.

Helen and Robin have both been long associated with different facets of the public transport industry.

Robin drove taxis in the early part of his career before switching across to bus driving with US Buslines and then Invicta in Belgrave.

During their time at Advance Coaches, Robin and Helen formed a husband and wife team when they were rostered to drive the V/Line service between Geelong and Apollo Bay. Robin would drive and Helen would sell tickets.

During their McHarry’s era, Robin initially drove the Wallington school run before handing over the run to Helen in 2010. Outside of this has been a combination of school and route service work.

Helen is also known as one of the chaperones with the social club shopping tours.

AND if that wasn’t enough…both have driven for the Lorne Falls Festival, the Avalon Airshow, and the Grand Prix in Melbourne!

Thanks to you both for an illustrious career carrying people safely to their destinations.